Recently, Katie Jones came back to our university to talk about her recent success and starting up her own business with her friend and business partner. She started her brand from an ethical standpoint of using reclaimed and upcycled yarn, but she says that the fashion always come first and if sustainability come in to it then it’s a bonus. Katie Jones herself is a very colourful character, I really admire her style, and she has a very forward way of thinking when it comes to sustainable fashion, she said that it doesn’t have to be boring or beige, there are many innovative tricks and tips you can use, like no waste pattern cutting, to give your garments an “in” to the hemp-adorned, dreadlocked sustainable fashion world. Katie said she became sustainable by accident, by using end of cone yarns and getting her base pieces (aran knit) from charity shops and eBay. 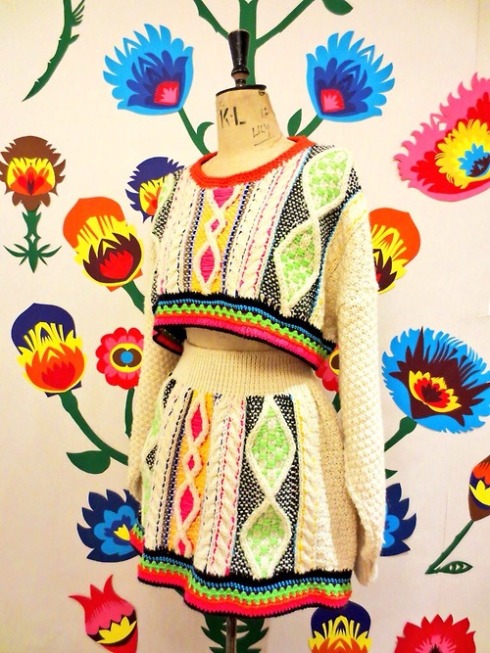 K2TOG was chosen to be part of the Emerging Talent Section of Estethica, showing at Somerset House, after Katie pitched the idea to the creator of the organisation, however, Katie had a lot of work to do as she was confirmed only 3 weeks before London Fashion Week. Estethica was founded by the British Fashion Council in 2006 to specifically showcase sustainable designers work and has since become the forefront of British sustainable fashion, Ada Zanditon is a previous designer of theirs. The organisation is mainly for start up designers, to get them out there and establish a name for themselves before going it alone. This brilliant opportunity catapulted Katie’s business from a small start up into an official business where she got serious orders from people wanting to buy, there was lots of interest from people in Italy and Japan as they love the bespoke, non mass produced element of her clothing. 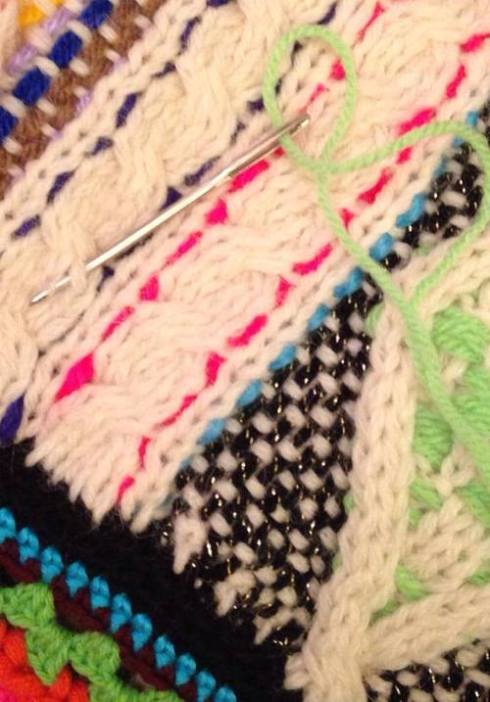 Going from being a student, then a freelance designer to then a fully fledged CEO was a big leap, and Katie said her personal challenge was to work out costing and mathematics, luckily her housemate was able to help, but she found it difficult not to undercut herself and was even told to increase her prices by her mentor at Estethica on the second day of the showcase. You can always set an RRP for stockists, you always have to remember to pay yourself a wage and you normally mark up your clothes by around 1.5-2.2% and then shops will add an extra 2.8% on top of that. These things are very important and you need to be very vigilant when you are first starting up, because most designers only last 4 seasons, after that the freebies and opportunities run out and you’re left to fend for yourself. Katie still works as a freelancer, most recently creating patterns for Knitting Monthly, a popular knitting magazine. She said that she has 2 very different and separate audiences, one week her work is in Knitting Monthly and then the next she appears in subversive fashion magazines like Dazed and Confused!

I always find Katie Jones’ visits inspiring and she makes me want to go out and do things creatively. The success she has had is purely down to hard work and talent and it makes you want to work hard to get where she is in the industry.